Your walking warrior made it to Day 13 – a whole Sunday in charming Santo Domingo de La Calzada. And a day of rest in my loosely scheduled itinerary.

I had sought refuge this time in Hospedería Cisterciense . The Cistercian nuns operate this hostal and although a little Spartan, the care is like being wrapped in a blanket and given chicken soup when you have a cold. The receptionist at the Hospedería spoke enough English to help me with my questions, directions and requests during my two days in Santo Domingo. On several occasions however, that same receptionist would perhaps have another life and not be at her position at the desk. So whichever sister was at the front desk would listen patiently to my pigeon Spanish and pantomiming.  Then she would give me the universal sign for “wait a moment” and go get Sister Ascuncion who spoke the best English among the nuns, which is to say, not so much – but we worked out our language differences with fervor! Here is Sister Asuncion with one of the ubiquitous Santo Domingo roosters.

Although hundreds of miracles were attributed to Santo Domingo, let me tell you the story of the most legendary miracle.  It is crazy!

So sometime in the 13th century, a pilgrim couple and their son were on the way to Santiago and took refuge one night at an inn in Santo Domingo de Calzada.  The son had the misfortune of catching the eye of the pretty daughter of the innkeeper.  When the boy did not respond to her flirtations, the girl slipped a silver goblet into the boy’s rucksack. (Cautionary tale. Woman scorned. Not good.) He was caught and tried and then hung which was the penalty for theft. His parents were certainly sad, but continued on their pilgrimage to Santiago. Fast forward a few weeks and the pilgrim couple return to Santo Domingo to reclaim their son’s body…which is still hanging in the town square.  Imagine their surprise when the boy…hanging from the gallows…greets his parents, announces that he is alive…and would his parents check with the sheriff and see if he could be cut down.  The parents adjourn with haste. When they get to the sheriff’s home, he has just sat down to dinner.  When he hears the couple’s request, he responds “Nonsense! That boy is as dead as the chickens that have been prepared for me for dinner tonight.” And with that, the chickens grow beaks and wings and resurrect and start squawking.

Now realizing that he is in the presence of a miracle and that the boy has been falsely convicted, the sheriff immediately cuts down the boy from the gallows and gives him a full pardon.

While the story ends there, the enduring quality of the miracle is celebrated everywhere in town. Even in the Cathedral de Santo Domingo. Are you ready? 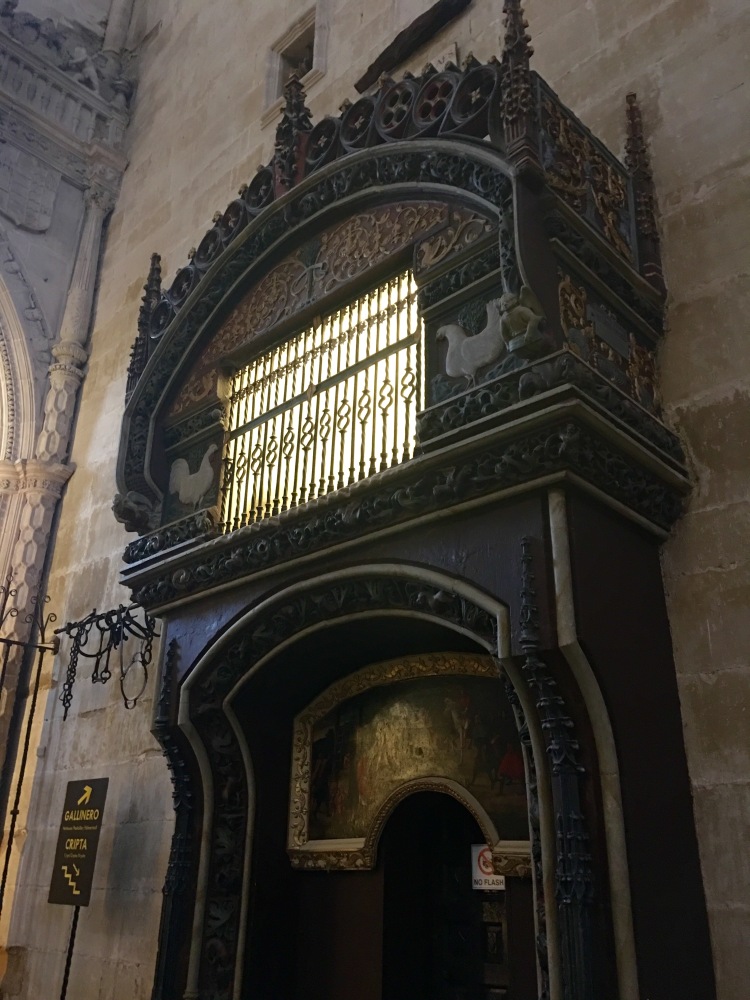 Yes, gentle reader. That is correct. You are viewing a chicken coop IN THE CATHEDRAL. One rooster and one hen are kept there for a fortnight before being traded out for two more foul feathered friends and resume residence in a more normal barnyard setting nearby.

And how about that piece of wood above the coop? Yes! You’ve guessed it! That is from the gallows where the dead-not-dead boy hung for a few weeks. But wait! There is more to commemorate this miracle at the Cathedral. 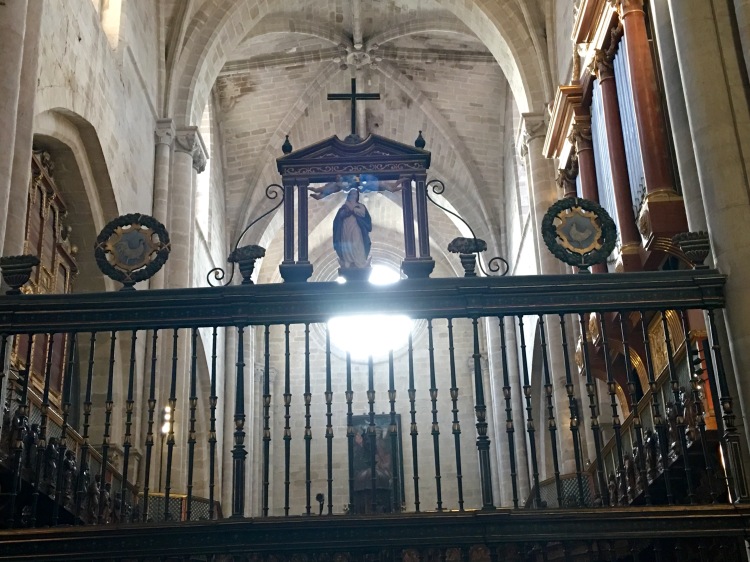 This is a view of the balcony of the Cathedral. Let us look closely at the discs mounted on either side of the statue of the Virgin Mother. 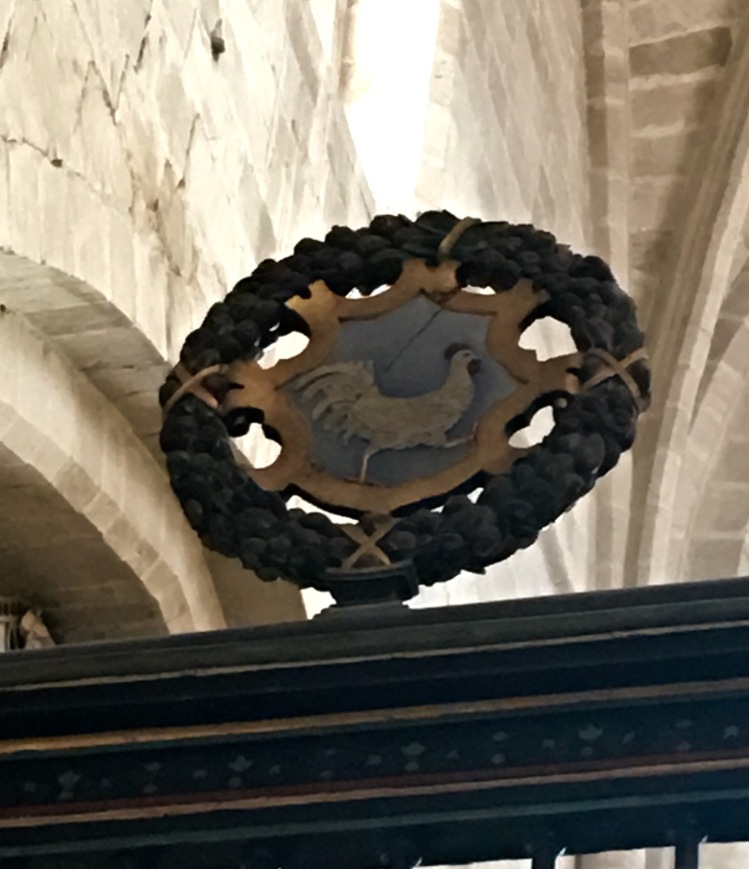 My quiet and gentle time of cocooning came to an end and Monday, your peppy pilgrim was back on the road with destination: Burgos on her mind. I was reminded that the way is always smoother when you give yourself time for solitude, reflection and a good miracle.

Lord in your mercy, hear my prayer.

I am Heidi. And couldn't be happier about that. I live in only mostly sunny climes after a nine-year stint in frequently grey Seattle. I love my lattes and wine. Lest I sound consumed with liquids, I also love my Babycakes, my family, my girlfriends, art museums, walking, the theatre, reading, movies, writing and finding things people and events to organize. I am a practicing Catholic and the happy mother of the amazing Olivia and a reluctant mother to the wonder doodle – Daisy.

View all of Heidi's posts.